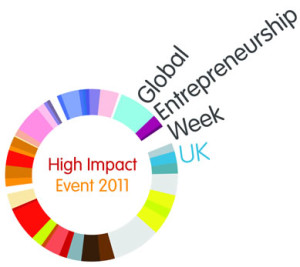 This week marks Global Entrepreneurship Week, a series of events taking place around the UK celebrating business successes as well as providing a platform for more people to create new opportunities and successful ventures which will flourish year-round.

To celebrate this week, Caroline, a highly successful buy-to-let property investor who made a name for herself after featuring on Channel 4’s “The Secret Millionaire”, will be Celebrating with the up an coming entrepreneurs who have graduated from the initiative called the “Concept to Cash in 90 Days” which coincides with Global Entrepreneurship Week.

More recently, the rags to riches businesswoman has completed the second of her highly successful “Concept to Cash in 90 Days” programme, where a dozen aspiring entrepreneurs have been guided and mentored to take their innovative business ideas to market.

These include South London Adejoke Abudu, who six months ago was facing redundancy as a chartered surveyor in the city, but turned round her passion for baking and healthy eating into setting up her own company. Working with Caroline, the 38-year-old came up with a business plan to produce wholegrain and fruity muffins under the brand name, The Guud Food Company.

“It is a fantastic product and the muffins are so tasty,” said Caroline. “Ade came up with the idea, we put together a business plan and now that has been rewarded by a first contract to supply a delicatessen in Hampstead, north-west London. For Ade, it is only the start of what could become a very successful business.”

Ade and 11 other fresh-faced innovators celebrated their graduation from the programme with a chauffeured limousine ride to the Hampstead-based My Deli in North London, where Ade secured her company’s first healthy muffin contract. That was followed by a reception held at the Ritz where they were joined by TV star Tanya Franks (Rainie Cross) from the hit BBC soap, EastEnders

The 12-month Mastermind Alliance programme will show new entrepreneurs how to put their skills into practice through mentoring and regular guidance.

Caroline admitted there are many flaky one-day business seminars which promise the earth, but simply dump information on prospective entrepreneurs who are left frustrated and disappointed. Her ‘can-do’ programme breaks the mould by providing a tangible pathway to success.

She regularly speaks at conferences and seminars alongside some of Britain’s top business brains including Dragons’ Den stars Peter Jones and James Caan, and the inventor of the world wide web, Tim Berners Lee. Inspired by what they had heard, many delegates would often approach Caroline at these events to learn more about how she built her business, what strategies she used, and so the “Concept to Cash in 90 Days” programme was born.

“There are a lot of people anxious to set up their own business, who want to be successful but don’t know where to start or have the confidence,” she explained. “I’m often asked to be their coach or mentor.

“What ‘Concept to Cash’ does is to take someone’s idea and turns their Passion into Profits – finding their product’s unique selling point, devising a marketing plan and putting in place a financial plan so that by the end of the 90 days they should begin to have a customer base.”

With Caroline’s current crop of entrepreneurs she has one lady setting up a natural skin care company, another providing a Human Resources consultancy, one woman opening a second ground-breaking nursery which teaches children to read from the age of two and a determined innovator who wants to set up a programme working with disenfranchised teenagers.

“Right now, with all the negative news and the state of the economy, it’s tough out there,” admitted Caroline. “But working alongside these people who are brimming with ideas and enthusiasm, I am helping them to turn their passions into business. If you are tough, persuasive and determined, then you will make it.

“I look at myself, ordinary stay home mum to achieving extraordinary results through to be on TV as Secret Millionaire”. Without the right support and mentoring, I would not be where I am today, and that’s what I have been giving these people.

“A successful business is having the right product, the right market and making sure you have a good enough market that needs your product or service. You then have to drive yourself and the business to be number one in that area.”

To coincide with Global Entrepreneurship Week UK, you will be able to meet Caroline and some of the graduates, who each have their own success story to tell. They will be joined by EastEnders’ star Tanya Franks.

The event will be a celebration and acknowledgement of 10 black women who have overcome challenges to set up their own businesses with the help and support of the “Concept to Cash in 90 Days” business mentoring programme.

“Concept to Cash” and the follow-up “Mastermind Alliance” clearly embodies the Prime Minister’s call to motivate and empower women in today’s economy.  On November 16th we are celebrating these women’s success as part of Global Entrepreneurship Week to encourage more women to create opportunities for themselves. 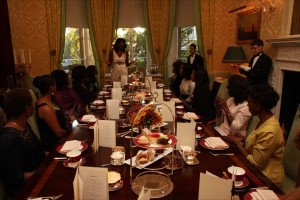 Among the graduates attending the press reception will be:

Idda Olagbaiye from West Dulwich, London (childcare): “My business was just casual until I joined Caroline’s boot camp at which point a light bulb went in my mind and opened my eyes”.

Florence Nyaruwa from London W10 (catering): “I learnt from Caroline what my passion is, how to create a business based on this and how to go about marketing it.”

Donia Narh, Bexley, Kent (education): “Don’t give up, utilise the resources you have, expand on them and don’t overlook the gift you have.”

Caroleen Palmer, North Ealing, London (natural skin care): “Caroline gave me the inspiration to see something through to the end – something I’ve wanted to do for years.”

Caroline will also be talking about her innovative “Mastermind Alliance” programme which begins later this year. This is a programme for already established businesses to get mentoring support from some of the UK’s most successful businessmen and women.

The day after the press launch, Caroline will be delivering a keynote speech on November 17th at the Business Startup Show in Earls Court where she will be talking about “Concept to Cash” and the “Mastermind Alliance”.

Attached are pictures of Caroline Marsh, Tanya Franks and Adejoke Abudu taken are the “90 Day Concept to Cash” graduation reception held at The Ritz in October.

Caroline Marsh is one of Britain’s brightest young entrepreneurs. The mother-of-one, who lives in Gloucestershire with husband Mike, grew up in Zambia and had a tough childhood sharing responsibilities for looking after the family following the death of her father when Caroline was just 13.

Caroline fulfilled her life-long dream of becoming an air stewardess when, at the age of 19, she was selected from 5,000 hopefuls to become a flight attendant with the airline Zambian Express. It was at that point that Caroline realised that if you set yourself a goal, you can achieve it.

She moved to the UK in 2002 with Mike, working for a marketing company, before going self-employed a year later promoting everything from cereal bars to cars.

Then, in 2006, Caroline and her husband were inspired by entrepreneur and property investor, Steve Bolton at a business conference in Alicante, Spain, talking about cash-positive property investment in the UK. The couple already had a few investment properties, but the conference and the one-to-one mentoring boosted a lucrative investment business which Caroline continues to grow today with astonishing results.

In 2008, Caroline appeared on Channel 4’s “The Secret Millionaire” spending 10 days being filmed in the deprived Liverpool district of Toxteth, with two-year-old son Ashley in tow. As a result of her experience on Merseyside, this inspired Caroline to give money and ongoing business support to two community groups in Toxteth.

Caroline has been sharing the secrets of her success at large business conference and conventions, as well as with schools and community groups, inspiring a new generation of entrepreneurs. She has featured in both national and international publications with her inspiring rags to riches story.

In 2011, she launched another business concept which helps aspiring entrepreneurs turn their passion into profits with “Concept to Cash in 90 Days”. Using tested proven strategies, the programme works with the entrepreneurs teaching them how to start, run and manage a business for success. The programme has proved very popular and is looking to go global in 2012.